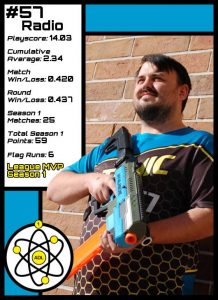 Hailing from Cedartown Georgia, Drew Mears, better known as his SENC nickname Radio has been a part of ADL since it’s inception at Game Zero. Boasting a variety of mid-field skills, Radio reached the top 10 player score for ADL’s Season 1 and was voted Season 1 MVP. Radio’s greatest asset on the field is unpredictability, bumbling his way to victory sometimes without pants, sometimes simply walking through a hail of darts, or sometimes from getting shot in the face in the first six seconds of the round. Unless his body quits on him, he won’t leave the field until the game is over. Radio is also a League Support Member, acting as a tertiary ref alongside TK-1138 and Project FDL.

After a rough start with the flu during season 2, the once MVP has found himself at the bottom of the leaderboards. Will he be able to rise from the ashes like a phoenix and ascend the ranks? Or will he find himself in the loser’s bracket before Endwar’s International Ion Rush Tournament? Check in regularly to find out!

We are a group focused on the growth of competitive foam blaster sports. We want to bring the fun of team sports to the foam hobby and help players find the games they want to play in!